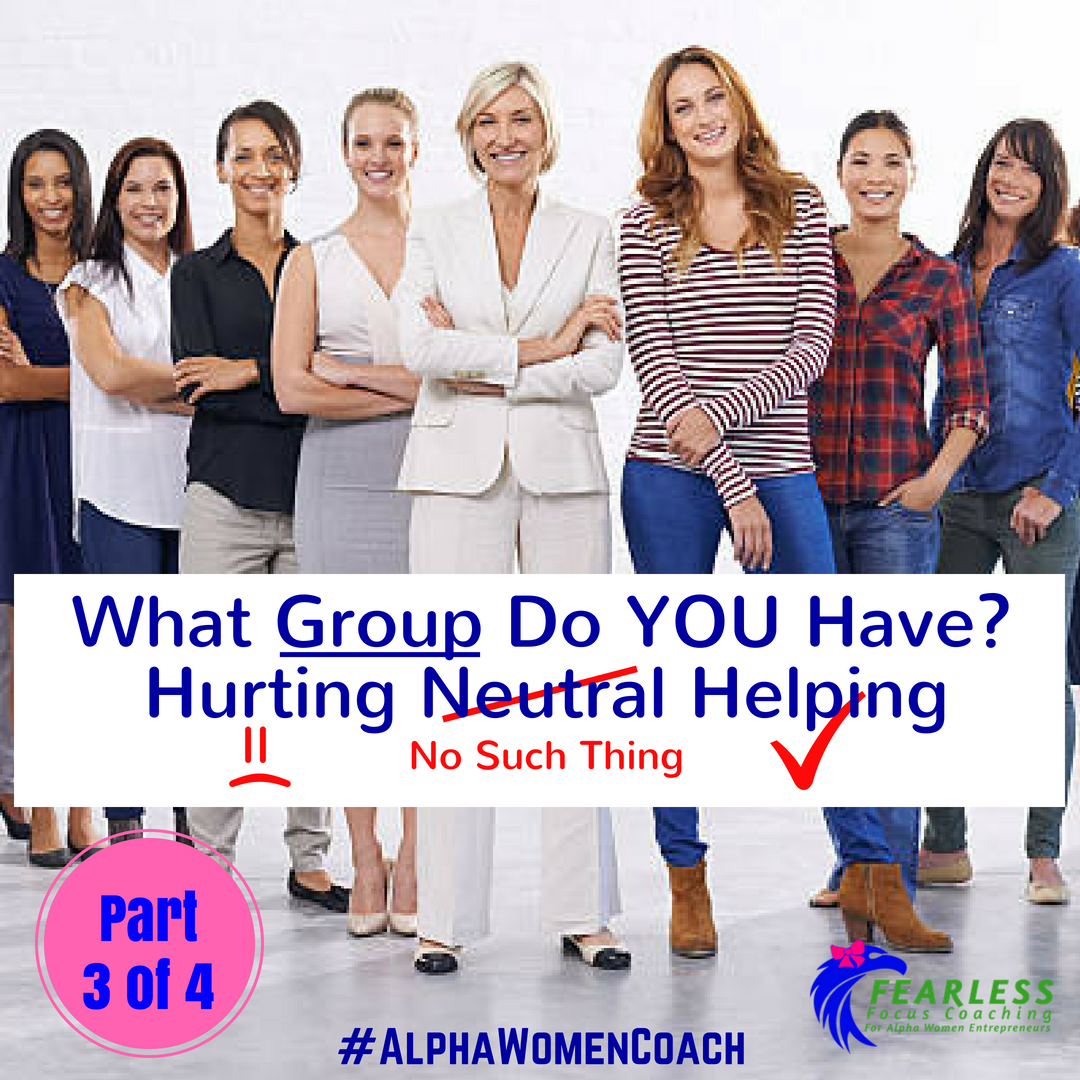 Who Has Your Back?

No discussion of how to get yourself out of a stuck place in your life could be complete without talking about just who you surround yourself with.

The 4G Guide to Getting Going looked first to your GROUND, then your GRIP and today we need to check on your GROUP. I was on a coaching call with an Alpha today and we had a breakthrough – a big one. She just realized money is no longer her TOP priority. Yeah…let’s say that again. Money is NO LONGER her #1 priority.

Here is what I told her:

1) If they freak out, it’s because money is their primary focus and goal and they can’t imagine making a decision without that being the most important factor – is that who you need to be talking to?

2) People who “get it”, would ask: what was missing from the job that was more important than more money?

Money is a BAD GOAL (read or re-read that puppy!).

Your friends and family can be unintentionally stabbing you in the back by applying THEIR priorities to your decisions. They will filter your choices through THEIR experiences, fears and doubts.

Their advice will always contain their point of view.

Seven years ago, I closed my law firm and left the multi-six figure income I’d built (and my half million dollar home…I do admit to missing the double convection ovens and private library) because I was really unhappy.

About 2 years ago my best friend admitted that she thought I was absolutely INSANE at the time. She said she couldn’t let herself think about what I’d done to start my whole life over, because it terrified her.  She couldn’t imagine walking away from what I’d built. She was loving enough to keep her fears away from me but most people won’t or can’t do that. Your Group is Either Hurting You or Helping You – Which Is It?

Repeat after me: There is no NEUTRAL. There IS NO NEUTRAL.

Neutral is the lie we tell ourselves when we know it’s kind of negative but we don’t want to do anything about it yet.

And yes, there are people that you can’t get away from. A neighbor. A sibling. A boss. So what do you do in those cases?

You need to have enough positive coming in to double cover their negative. You’ve probably heard the formula for giving negative feedback? Say something positive, then the bad thing, then something positive. If you keep the ratio 2 to 1, positive to negative, people are okay.

That applies to you too!

Look around and count how many people you have that are positive and how many negative. If you think they are neutral, count them as negative. If someone really is just existing and not adding to your life but taking your attention, that’s negative!

Your goal is to make sure you have 2 or even more positive people for every negative one.

Are ALL Positive People the Same?

Nope. It is best to have some who have the same ambitions as you. They will support you differently than the positive people who live on the couch.

And it is good to have someone who is ahead of you, for you to model their energy and attitudes. Mostly, you can’t pull this off on your own. That really is reason that group coaching works so well. You get both at the same time.

The group you came from gave you certain templates that you follow without noticing it. You want to get into a group that is learning to CHANGE their templates to what they want them to be. Conscious creation. This kind of group will PUSH you out of a stall, rather than PULL you into one.

Beware! There are some positive people that are actually negative. Because they are all talk and no action.

(Ok, so that Elvis song popped into my head: …a little less conversation, a little more action please!)

P.S Be careful whose posts you read and like on social media. That is a group too.

Be mindful – is your focus always money? Poor people are always focused on money and wealthy people on their desires – see it? Don’t follow the group. The masses are always wrong. You want to find a small group that is going against the flow.

P.S.S My interview comes out TOMORROW!!!! www.RiseUpKickAss.com come see me! Elle’s quote, “I just watched your interview and you are going to inspire the hell out of some folks!”