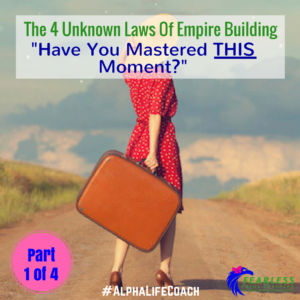 Empire Building (‘Cause You Want One!)

I know you have dreams. Big ones. Come on this journey with me and learn what others are not teaching you. I’m a Foundations Coach. I teach you how to rebuild your foundation and guide you with Counter-Intuitive advice.

That is why we need more advice that is AGAINST the mainstream. We need more Empire builders.  And if that is you (you are in the right place) you need to pay close attention this month. Let’s start 🙂 So you want an empire…OK. We can do that. But…not Right Now.

If you’ve been following me for any time, you’ve heard me talk about the ego and how it wants to keep you away from the Alpha life. Your ego is extremely good at using anything around to suit it’s purpose of blocking your good. Ego loves to use noble intentions like building an empire against you.

The Problem With Your Focus

How does it do that? Simple. When you are focusing on your Empire – you’re looking too far out. It’s like needing to lose 60 pounds and you’re focused on finding the clothes for when you get down to a size 2. You can go find clothes for size 2. But that doesn’t help you lose that 60 pounds.

You stay stuck right where you are, because you’re pursuing the very end of your rainbow instead of getting busy with your first, foundational steps.

Empires must have very, very firm foundations. That is why you must pay attention to the building of that foundation right now. The NOW is where your focus needs to be.

Watch yourself. Do you often talk about the $250,000, half million, $1M in income and that empire?  That language tells you that you are future focused and not present moment focused.

Never Set Out to Build an Empire

You attract way too much resistance and throw too much pressure on your path when trying to supersize everything now. Sara Blakely, the woman who built the Spanx empire (net worth $1.01B) did not think “empire” the first day she cut the legs of her pantyhose. And “This is it! NOW, I have my empire!” probably wasn’t Ms. Huffington’s thought in her first months either. That thinking takes you OFF track.

Most of the people you see with empires are telling you their empire story in hindsight. What all of them did do, is begin where they WERE, with what they HAD and kept GOING.

Empires begin with mastery of where you are currently and where you next need to be. Make that your focus. You will still get there and get there faster. Focusing on an empire at the beginning of your path usually triggers MASSIVE subconscious resistance.

We have to rebuild your foundations so you can BELIEVE you can HAVE THAT and THEN focus on it.