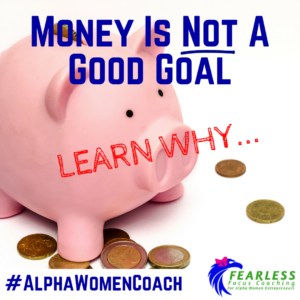 There are 4 pretty serious goals that you have been taught to seek directly that don’t work energetically and spiritually. Those BAD goals are Money, Love, Weight Loss and Success. (Yes those!)

This month we’re going to tackle all of them, starting this week with money!

Make sure you look out for the weekly Friday’s Motivating Video that will dive deeper into this coaching post! FB: Fearless Focus Coaching

Money doesn’t work as a direct goal because money is always a byproduct of something else.

When you focus on money as the direct goal you’re not focusing on the thing that actually generates the money – you are mistakenly focusing on your NEED for or lack of money. That is BAD because your focusing on lack, has “lack” stay put and expand.

Let’s be practical, if you are reading this you have already HAD a money goal. How well did it work? I’ve worked with Alphas at all income levels – multi-millionaires to and including an Alpha that was unemployed for 17 years and just got a job during Alpha Group Coaching! You have been TAUGHT to set a Money goal. To watch those numbers like a hawk and push and shove and engineer to reach it. Even if you HIT it, you are tired and wrinkled and worried. Why worried? You know what it took to GET the money, so it feeds your fear of how easy it is to LOSE IT.

Do you wonder why really wealthy people ALWAYS say they aren’t motivated by money? You thought that shifted AFTER they received their riches. Nope. Mostly it came BEFORE. They got passionate about SOMETHING. And their pursuant of that SOMETHING generated the byproduct of MONEY.

Do not go after Money as a primary or direct goal. It mostly does not work and when it does…? Well, I’ve been there, made multiple six figures and was NOT HAPPY. (Hint: I hadn’t pursued happiness, I’d gone after & gotten MONEY.)

Money is a bad goal to pursue directly. You actually want some feeling that you believe that money buys. THAT feeling is the real goal.

P.S. Excited to do this series on Bad Goals! When I hit yours, raise your hand and fess up! Hit reply and tell me about it 😉 It’s good for you to shine a light on behaviors you are committing to change. These goals are ALL SABOTAGES!


If you ask me a question on Money as a goal, I’ll answer it on video Friday!

Tanya Stewart is “The Alpha Woman Coach” and began coaching strong women as a Divorce lawyer in her own high conflict law firm 20 years ago. She understands how Alpha women are wired and using her Master’s level Metaphysics background and Advanced Clinical Certification in Hypnotherapy, she brings rapid change from within. She is a speaker, published author and Mensa member whose coaching is recommended by the World-Famous Motivator, Les Brown, Best-Selling Love Coach Greg Baer and International Change Expert, Dr. Eldon Taylor. Her greatest credential is deep, daily joy, having finally separated struggle from success.

Sorry, the comment form is closed at this time.