Fearless Focus Coaching / Uncategorized  / [Focus Mag] How Does Your Ego Work? (and why it hates you…) 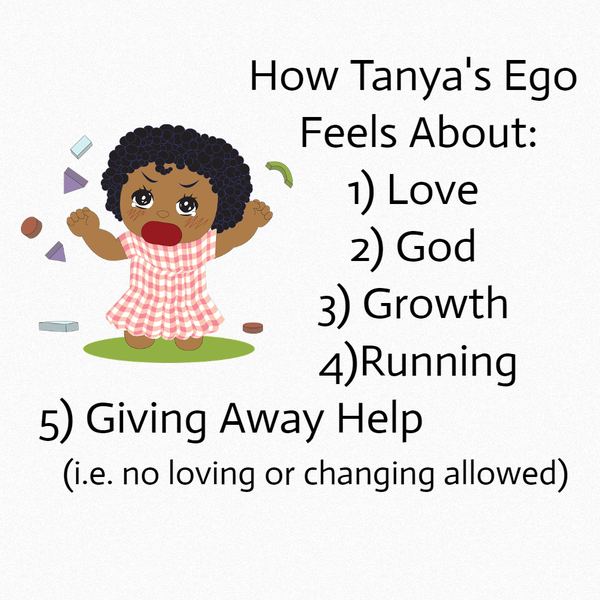 How Does Your Ego Work? (and why it hates you…)

By now you know what I stand for and who (or rather WHAT) I stand against. The Ego.

It’s not the principal villain, it’s pretty much the ONLY villain. Your life gets easier when you understand your enemy better.

So, today I will give you the crash course on ego and use the Christmas 5K I just ran to demonstrate how an ego works. And yes, they all work the same way. Just because mine is well managed doesn’t mean it’s DORMANT. It’s always trying to spin me too.

From A Course in Miracles

The ego is suspicious at best and vicious at worst. Isn’t an ego just “being conceited”?

Nope. You probably grew up hearing someone say “that guy has a huge ego” and equated ego with conceit. When I am referring to ego it is easiest if you imagine a duplicate of yourself, stuck at the age of 6 (about when ego forms) SEPARATE from you but inside of you.

Oh. And yes, it is also conceited. (See picture of my ego above.)

Where does it come from?

I don’t know, nor do I think anyone does. It’s part of our factory equipment. It forms slowly and comes into full bloom about 6 or 7 as we learn that we are separate from others. Egos help you conceive of you as “you” and not me. And then we learn we are vulnerable and become afraid.

Unfortunately, egos are purely fear based. Even Jesus had one. He battled it and won during the temptation on the mount. Most religions refer to ego as Satan. Yep, that is the level of problem we are talking about. In Hebrew the word Satan means the adversary, “the one who resists.”

What does it want?

To be special. To have power, so it can ensure that no “other” can take what it wants or reduce what it has. The ego acts like (& motivates) our most feared dictators.

It really can’t have enough because it doesn’t understand security. More and more is the only type of security it knows. Hence, all addicts are puppets of ego. Whatever they are addicted to, the ego keeps increasing the need.

Once something hurts you, the ego sets out to “protect you” from that pain. The easiest way to prevent the pain of a relationship ending? Don’t let you have one, always leave first, pick someone that will never leave (and settle) OR pick people that aren’t good for you, so when they DO leave you can pretend it doesn’t matter.

If I had a penny for every time I’ve been asked this, I could buy a coffee at Starbucks! Probably a medium (incidentally, pretentiously renaming the sizes works because your ego likes it!  The people who adopt and follow the system feel “special”, “included” and “smart” so their ego says Starbucks is a better choice vs. a plain old medium coffee elsewhere).

Your ego does in fact HATE you because it’s in competition with you. It wants to be in control of all the decision making so that it can “PROTECT” you, i.e. make sure ego’s power and control continue.

If you know Star Wars you’ll get this even faster. Once there was a galaxy that had regular people. They were under attack by terrible people. None of the regular people were up to the job of fighting the terrible people continuously. They were afraid. One guy (EvilGuy) steps up and says, “Don’t worry, I’ll fight the terrible FOR you” (for history buffs, Hitler inspired this story).

Yeaaa! All the regular, afraid people cheered. “I just need you to give me TOTAL CONTROL OF EVERYTHING to help me fight the terrible people. But….um….I’ll give it RIGHT BACK as soon as I’m done.” Hmm. No one wanted to take 100% responsibility for fighting their OWN battles, so they agreed. EvilGuy took power, revealed himself as EvilGuy Dictator and they were stuck.

THAT is how your ego manipulates you. It’s EvilGuy.

It keeps you in crisis, it encourages chaos. Why? So you will constantly be afraid and ask IT to fight your battles FOR YOU. You hide, it fights. Price? Control of your decisions. Once it gets control it does NOT easily give it back.

So, it resists any CHANGE to improve your situation. It fights any GROWTH to maintain chaos and guilt. It BREEDS fear. It fans the flames of all the messes in your life. In many, it would even rather see you dead than happy. Because you happy, is EGO starving, powerless, weak and exiled.

Love and God? Rejected, because both bring peace and acceptance. Not okay.

It’s easiest to SHOW you ego by watching it work. You’ll recognize yours as you follow along as Tanya decides to start running again. Attempting a CHANGE for my GROWTH – two no-nos.

Running is a great EGO exercise, so I have my clients running races. Why? Because we don’t WANT to. Making yourself do what you don’t want to do, but need to do, is a secret of success.

I am highlighting my ego with a play by play. I have it’s “volume” turned way down but I know it’s there and sometimes it yells. Most of what it says, I either don’t notice or ignore.

Tanya: I want to return to running.

Ego: Your knee has been dodgy. Wait til next year. We can start out slow and work our way up.

Ego: Are you on crack? It’ll be cold. You run indoors. You don’t have time to get your new running shoes. The old ones are shot. You don’t want to hurt yourself. We don’t have enough time to train. You are freaking slow as dirt right now. Why did you stop running earlier this year anyway? We told you to KEEP running with the interval training. NOW we are behind…Those races are all so far away.

Ego: In CHICAGO? In winter? In the hood? Seriously? You know you aren’t going to do that. When do we have time? What about the new website? You need to work on that.

Tanya: (It’s the night before.) Crap, running tomorrow at 8am, need to get ready.

Ego: There a like a MILLION things you need to do. What are going to wear? Have you checked the weather? 40 degrees and RAINING! You don’t have running rain gear. We need to buy rain gear. What if you kill your ipod in the rain?  You’re alone. No one to take photos. Hold your stuff. You don’t even know where you’re going. And you need to go to sleep like, what….NOW?

Tanya: (Going to start of race.) Awesome, I’m doing it!

Tanya: (Running well. Hit the 2 mile mark and realize I am running faster than my OLD race pace! Have 1.1 miles to go.) WOW. We are gonna hold! We are doing this!

Ego: Ok, soooo….. I thought we’d gone out too fast. You are probably going to run out of gas on this hill. It’s a freaking ski slope. We are so far ahead, we could just walk, you know…REALLY fast. Can you imagine how your knees are going to feel later? God, slow down so I can drink this damn dixie cup of water.

Ego: I knew you could do it. You never should have just set your goal to “finish”. That was ridiculous. We are in great shape. If you’d seen our 1mile time, YOU would’ve slowed down. At least we didn’t finish terrible. Passed those old people! Aren’t you glad I had you speed up?

Now you know a little bit about what your ego is, what it wants (your misery), why (to gain control) and watched a day in the life of an “ego” (thankfully on “mute” for me!). Running. Doesn’t matter if you’ve never done it or aren’t in shape.

Jeff Galloway’s Run/Walk method will work for you. I was flying running 1 minute and walking 1 minute. My ego had a LOT to say about the run/walk method when we began. It thought alternating running and walking was beneath us. We used to be FAST. Semi-pro athletes. Lol.

It works. You can get up off the couch having NEVER run and run your first race in just a few months. It got me through my first Half Marathon (13.1 miles).

There is an app for it too. Thank you Sue for finding it and telling me about it! Want to hear what your ego sounds like? Just announce any badass goal out loud and give it a REAL deadline. The first thoughts you hear, the LOUDEST ones telling you why you can’t, shouldn’t or won’t are your ego. Learn to recognize it’s voice.

Pay attention to how your body feels when ego gives you it’s opinion. It takes practice to discern ego from intuition but once you get it, you’ve got it and you won’t lose the skill.

Want a $50,000 coaching tip? Just do the OPPOSITE of whatever your ego says. About 90% of the time, that will get you where you want to go. Once your ego knows you are set on a course (committed), it gives up trying to stop you and switches tactics. Watch for any of these: delay, distraction, pushing you too fast or guilt.

My ego began with – don’t run a race (blocking). Moved to  – don’t run one right NOW (delay). Once I committed (super critical), it switched to how hard it would be and what it would cost me (distraction).

The ego diverts you by HELPING you do something else. This is why people with relationship problems hide by working more. The ego HELPS them avoid fixing their relationship. Your ego will distract you with “noble”, generous sounding things to make sure you fail.

Another popular tactic is stop you is burn you out. Got a goal? Fine. Do it perfectly. Run like you did 25 years ago. You didn’t? You’re too old to run anymore (guilt).

Wow, Did You Hear? Boyfriend of a Client Says…

She is able to do MORE while feeling LESS stress. And YES, that makes the couple better.

If Fearless Focus Magazine made a difference for YOU, would you share this on your Facebook page?

I Show those READY for Better & WILLING to Change

How to Transform their Lives from Messes to Miracles, Overflowing in Loving Relationships, Vibrant Health, Visible Wealth & Perfect Self- Expression.