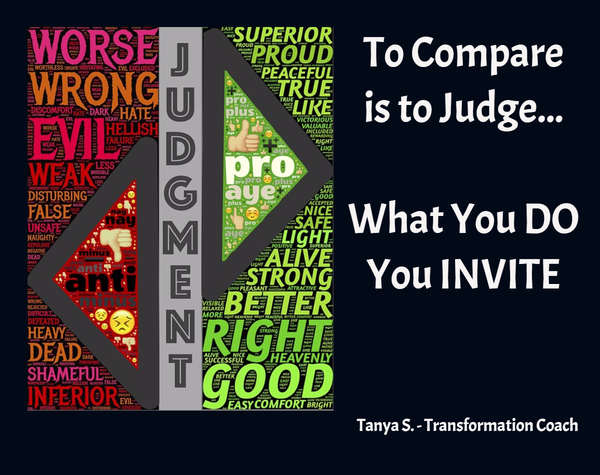 If you want to add insult to injury (and why not?) add in the fact that someone is BUYING their all-you-can-eat buffet! Now your sandwich tastes WORSE.

“Comparison is the death of joy.” Today, I am teaching about five kinds of comparisons we do all the time & why all of them hurt you. My goal is that you notice where you do this and tackle it.

Comparison to the Impossible or Improbable

Comparison of Those Not Trying

Comparing to the Impossible and Improbable is the ego’s trick to get you to feel like a failure no matter where you are.

I don’t have to know your middle name and full street address to say if you compare yourself to our greatest teachers, Jesus, Muhammed, Buddha, Ghandi, Mother Teresa you are going to lose. You are, in fact, going to look petty, mean, selfish, fearful and lazy.

Most of you don’t have to stretch too hard to get that. Ahh, but what about comparing yourself to Oprah, Tony Robbins, Richard Branson or Tim Ferris of the 4 Hour Workweek? They feel more “human” and STILL you are worlds away from where they are. Not motivating.

Even comparing at a familiar level can hurt you – the perfect sister, your ex’s brilliant new job, that Martha Stewart mom or even me for that matter.

Your ego wants this comparison to make you FEEL less than and not enough. That energy TURNS off your ability to do better, see better or expect better (and you KNOW what I teach about expectations).

Comparing to Those Not Trying is the ego’s trick to get you to feel like a success no matter where you are (and usually it’s not that far along). No more action needed. You’re GOOD, just coast.

Compared to the people who NEVER go to gym or make any effort to exercise and are 60-100 lbs (27-45 k) overweight your 20 lbs really isn’t anything to worry about.

This is also known as apples to oranges comparisons. If you compare a sour green apple to a lemon well, damn. That is the sweetest apple you EVER had. (I know they are decorative but I don’t like green apples! Just writing this flooded my mouth with saliva in defense!)

Comparing to Avoid is the ego’s tool to get you to run an inappropriate comparison and then “decide” that you are helpless to change the outcome.

Here’s how it goes: You are in a job you don’t like. The last time you were in a job you didn’t like and you spoke up to your boss, you got fired. So, since this situation is similar, you feel “STUCK” and do nothing.

Comparison to avoid depends on comparing what you have right now to a past “failure situation”. The brain is EXCELLENT at this. Remember, our brains do not like to THINK.

They like to recognize patterns (COMPARE!!!) and pull out the solution we used before. If that solution was a failure solution – your brain gives you two options – apply it anyway (yep, it’ll work THIS time) OR abandon hope and avoid.

Well meaning (or mean) parents will HELP you draw a comparison between what you are doing NOW and what your SISTER did before (that was an epic fail). This has you making decisions based on trying to AVOID which is fundamentally negative and will get you a matching negative result by law.

Comparing to Justify Slow Improvement is my favorite. You compare yourself to older, suckier versions of yourself so that you can keep exclaiming that you are doing marvelously NO MATTER WHAT. (Stop IT!)

I met a (chain smoker) guy who told me he was trying to quit. I respected that. When I went to visit (should have brought a respirator WITH me, poor planning on my part) I discovered he was smoking a  PACK of cigarettes a DAY. WTF!

I, being a coach, gently inquired (read, DEMANDED to know as I choked to death trapped in a smoky car for 2 hours) where was the quitting part?!  Well, he said proudly, he — USED to smoke more than 2 packs a day. THAT shut me up. Progress right?

As I coach I do not let my clients play this game with themselves. It’s the “I’m making progress” compared to a sloth game. And it’s sooo comfortable. (Comfort is a swear word for me.)

“I’m trying.” “I’m making progress.” Don’t fly if you are still doing something you shouldn’t be doing at all. Here is where you need a no-excuses type coach.

Comparison to Support Victimhood is another popular ego activity where you attempt to win the “I have it hardest” Olympics.

People compare their lot against other victim groups. They happily reach the consensus after comparing that THEIR oppressor is SURELY the worst of them all (Gold!). And THEIR victim group is surely getting the worst deal of all the victim groups (Record Breaker).

So let me ask you right now – do you know what victim group you identify with? Almost everybody’s got one. And the trick is, they don’t come with a label saying “I am a victim group”. You’d never willingly join that!

A victim group is any collection of people who have taken the general view that X is the thing that is “after them”, oppressing them, screwing them or unwilling to help them get what they want. If you recognize you can be blocked by an external something, you have given that something some of your power – hence the victimhood.

If I had to claim a victim group, it would probably be small entrepreneurs/business versus the government doing crazy things with my money. See, even I’ve still got one.

All victims groups DISEMPOWER. Mainly because they focus continually on what’s wrong, what’s not working, what’s missing – the lack, the fear, the crap. Not on solutions, possibilities or opportunities.

The only way you can focus on all those negative things is to COMPARE. Victim groups live and die on comparisons where they got “less.”  Kill the comparisons.

The Lesson at the Gym

I stopped in the middle of creating this article to go to the gym. At the gym I go to a high intensity interval training class call 360 where you work your whole body. It. Is. Hard.

I got to listen to my own head today while I was working out and watching the people who showed up for class. There were two new people. They both quit halfway through. I know they compared their FIRST day to my established endurance. That’s just silly.

I use my gym class as a barometer of how well I’m doing reducing judging and comparing thoughts. I have improved massively this year using this measuring stick.

Years ago, I’d hear my ego making comments about other people’s effort (so I felt better) or comparing me to some of the super athletes (ouch, then I sucked).  I no longer do this. If I do notice a comparing thought, I gently change it.

The Antidote to Comparison is Compliment

That takes me OUT of comparison and focuses on what is good and what I like – which only ever brings more of that into my life.

Because the habit of comparison is so deeply ingrained in subconscious – do not expect that you can just flip a switch & decide to stop comparing and do so. What I would have you do is pick a very short time frame, like from breakfast to lunch and set out to just NOTICE all of your comparisons.

You are looking for comparisons that result in negative judgments, statements or feelings. As you spot each one, STOP IT (video).

I have an “I am” app on my phone & iPad. It pops up during the day and tells me I AM amazing (and yes you can pick from a list of awesome adjectives to find the ones you like the best!). Here is the one that just popped up now. I am Remarkable!

Comparing comes from not feeling like you are enough. Use this free app to help fill your empty tank!

It’s in the Apple Store, Google Play and Itunes FREE.

I won’t always have FREE resources but when I do – GRAB THEM! Tomorrow morning from breakfast to lunch watch and notice how much you compare things. When you notice one, don’t freak, just change the comparison to a compliment. It will take awhile  & clear focus but you can begin to reprogram this habit first with awareness of it.

Next time you are upset about something ask yourself – what am I comparing to what I have that is making me feel I don’t have “enough”. Many times the comparison is your reality versus an idealized job, mate or life. Comparing ANY boss against an “ideal boss” that doesn’t exist generates pain. Whether you seek validation for yourself (praise) or condemn another (criticism) you are using the external to try to make yourself feel better internally. If you do not go “within” you will go “without” – it’s a law. So comparisons involving externals must end poorly. Happily, looking back at how far you have come is internal referencing not comparing – whose object was judgment and superiority.

Wow Did You Hear? Tanya, It’s Doug M. and I just wanted to take 30 seconds out here and to call you up and tell you what an incredible individual you are. Thank you so very much for those tapes that you sent. And you have NO idea what positive influence you have in people’s lives. Especially mine. Just to tell you to have a very wonderful day! Thank you. Bye.

If Fearless Focus Magazine made a difference for

I Show Alpha Women Entrepreneurs How to Stop

in Your Relationships, Own Your Potential, Build Your

Business and BALANCE IT ALL.